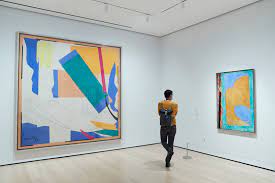 Modern art can be broadly classified into various movements. In this article, we will discuss several categories: Pop art, Abstract expressionism, Surrealism, and Action-painting. Let’s explore the different movements of modern art and their significance today. We will also cover different art styles and their significance to our society. And last, we’ll cover the history and development of these movements. This article provides you with a brief overview of each style.

Sebastian Salazar Bondy, a Peruvian writer, commented on an exhibition of Surrealist paintings in Lima, Peru in 1954. He describes Surrealism as a “bold attempt to break away from reality and to create art that is not figurative.” Nevertheless, he has little to say about the works of Rene Magritte. However, he does have a few words to say about Surrealism in general.

After the first exhibition in 1932, the Surrealist movement gradually lost its influence. Many artists left Europe, mainly to escape Nazism and Fascism. However, many major artists sought refuge in North America and Surrealism was embraced by the art community in New York. The avant-garde art scene in New York City embraced Surrealist ideas and began working with artists such as Jackson Pollock and Robert Motherwell. The group embraced ideas about dream imagery and the unconscious quickly. The avant-garde movement in the city of New York supported Surrealism, while key taste makers supported the emerging Abstract Expressionism.

The Abstract Expressionist movement was a major influence on art in the 20th century. The work of Jackson Pollock and Willem de Kooning is generally viewed as the beginning of the movement. These artists’ paintings were influenced by surrealism and their interest in the unconscious and archetypal symbols. The Abstract Expressionist movement changed the face of art by attempting to create paintings that evoked a particular feeling or emotion, without necessarily referencing the human condition.

Many modern art critics and historians view Abstract Expressionism with skepticism. This largely reflects their personal opinions and often lack of knowledge of the history of art. Although the movement is widely considered to have been rooted in the 20th century, it has continued to influence artists today. While many contemporary artists are working in the abstract expressionist style, the fundamentals of this movement have remained the same. The fundamental difference between the two styles lies in the use of color.

While both are popular today, they do differ in their approach to creation. Pop Art was created to go against the grain of mainstream culture and incorporate commercial images. Because of its enduring appeal, it has evolved into a distinct style of modern art. Its recognizable style has led to many interpretations of its works, ranging from satirical to sarcastic. Here are a few things to consider when choosing between these two different art forms.

Pop Art was widely popular in the 1950s and 1960s. The popularity of this movement was a direct reaction to the seriousness of Abstract Expressionism. It was mass-produced and often used popular symbols. Because of this, Pop Art sparked a critical debate and changed the way artists viewed art. Famous artists like Andy Warhol used images from popular culture as inspiration for their work. Pop Artists, like James Rosenquist, were not afraid to make statements about the sex and gender politics of the times.

The concept of Action Painting is a form of free expression that has a strong connection to biography. According to Rosenberg, the first mark of a painting affects its subsequent trajectory and thus influences the next mark. The artist and canvas are influenced by each other’s reactions, so that each mark is a decision and a new question. The resulting works are spontaneous, yet they are always within the boundaries of a dialogue.

Jackson Pollock is a prime example of Action Painting, which has been practiced since the mid-1940s. The drip paintings created by Jackson Pollock opened the door for more gestural and expressive painting styles. Pollock was referred to as the father of Action Painting, as he pioneered the practice of painting with hardened brushes, sticks, and basting syringes. The process of drip painting has become synonymous with Pollock.

Tachisme is a French style of abstract painting that first became popular in the 1940s and 1950s. The term “tachisme” was first used in 1951, but it was not an exact copy of abstract expressionism. The art style has a similar color scheme, but focuses on the shapes of the objects instead of their forms. Tachisme is often viewed as a European response to abstract expressionism.

Some of the artists associated with Tachisme include Georges Mathieu and Jean-Paul Riopelle. The German painter Wols was also a prominent Tachisme pioneer. Georges Mathieu and Sam Francis were also influenced by Wols’ work. The art of tachisme was later adopted by other artists like Pierre Soulanges, Henri Michaux, and British painter Patrick Heron.